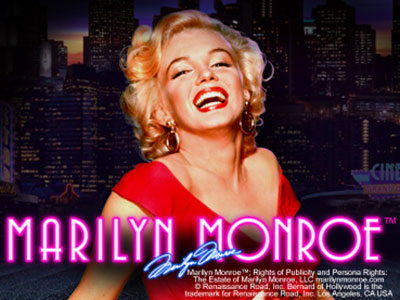 John Wayne and Marilyn Monroe have never shared screen space, probably because they starred in different types of movies. One was the ultimate cowboy and the other was the ultimate sex symbol. But they do share space at Playtech online casinos. The leading software provider has created retrospectives on both these Hollywood stars that will take players a long way down memory lane. They can be played at Omni Casino and Mansion Casino.

The John Wayne online slot has the reels set in the main street of a Western town. The wild symbol is a full length colour picture of Wayne, which also awards the top line payout of 5,000 coins. You also have three black and white close ups from his earlier movies. Wayne’s couture is represented by his cowboy hat, red scarf and cowboy boots. John Wayne was affectionately referred to as Duke. Three or more Duke’s badges anywhere on the reels trigger a bonus game. You pick one of the badges and will be awarded a random cash prize. The head of a steer triggers the John Wayne’s Ranch Bonus. You are initially awarded 3 free spins with a multiplier of x1. You shoot at cans on the range to enhance the benefits. You can win more free spins, the multiplier can be increased by x1, a ‘More Free Games’ symbol can be added to reel 3 that awards four more free spins or an extra wild symbol may be added to the reels.

The Marilyn Monroe slot game loads with a close-up of the screen siren against the background of a movie theatre. Marilyn Monroe is the wild symbol with a 2x multiplier property. It awards the top line payout of 10,000 coins. When it appears stacked on any reel, it converts to a full length image of Marilyn Monroe standing with her skirt billowing in the air draft. Other symbols include close-up images of Marilyn, a TV magazine with her picture on the cover, an old fashioned camera, a star and playing card icons in skin pink. The game logo awards scatter payouts and triggers the Backstage Bonus feature. You are initially awarded 10 free spins and a 2x multiplier, but have a chance to enhance these values. There are five Monroe pictures on a pin up board and you have to select two of them to win extra free spins or multipliers. You can win up to 45 free spins with a multiplier up to 10x.