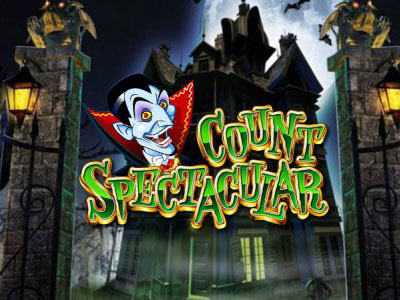 This Halloween you have a date with two fantastic characters – Winni the Witch and Count Spectacular. You will find them in two popular online pokies at Australian online casinos like Fair Go, Ace Pokies and Majestic Slots. These video pokies are from the portfolio of Realtime Gaming.

When Count Spectacular appears simultaneously on reels 1 and 5 in the same spin the bonus feature is triggered. You have to choose one from the free spins and the respins. The free spins option awards 12 free spins in which all payouts are tripled. The free spins can be retriggered. The respins feature awards four respins. The advantage offered is that reels 1 and 5 are fixed as expanded wilds and the other three reels are spun again. Count Spectacular online pokie includes the Major and Minor randomly triggered progressive jackpots.

Winni the Witch plays the lead role in Bubble Bubble online pokie. As the wild symbol she appears only on reel 3. But Winni makes up by being an expanded wild symbol with a 3x multiplier property that substitutes for the scatter symbol as well. The cauldron is the scatter symbol that triggers the bonus feature. All the symbols depict the Halloween theme. The high paying symbols are cat and raven, which are Winni’s constant companions. The other symbols are frog, jack-o-lantern, spell book, potions, candles, skull and spider.

You pick one of the triggering cauldrons to determine which of the three features you will be awarded. The Great Ghosts feature awards 20 free spins. Up to 9 ghosts may land on the screen and convert symbols into ghost wilds. The Wild Witches feature awards 9 free spins in which up to three reels may be filled with expanded Winni wilds. The Realtime Gaming Win-Win feature is attached Wild Witches. The Bewitched feature awards 7 free spins with each free spin having the expanded wild Winni on reel 3. Bubble Bubble is a 5×3 online pokie with 50 paylines. The reels are set in the background of a haunted house.