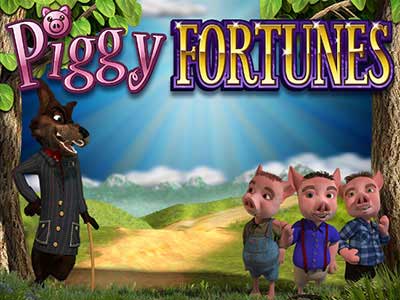 The Microgaming online pokie is titled Piggy Fortunes and can be played at online casinos like Casino Mate and Royal Vegas. The houses of straw, sticks and bricks are the high paying symbols. The three little pigs together form the scatter symbol. The big bad wolf is the wild symbol, only he is not bad in this online pokie. Such online pokies need great win animations and Piggy Fortunes obliges. The Big Bad Wolf feature is triggered by landing three or more scatter symbols in the same spin. You get an indefinite number of free spins. When the wolf appears next to any house it will blow away all houses of that type down, awarding a payout multiplier of up to 4x. When three or more scatter symbols land on the reels, one type of the blown down houses will be restored. The feature will end when all the houses have been destroyed.

The Playtech online pokie game is titled Piggies and the Wolf and it is live at online casinos like Omni Casino and Mansion Casino. The online pokie has 50 fixed paylines in the 5×4 reels structure. Both the pigs and the wolf are depicted as cool dudes. The high paying symbols are the three pigs and their houses of bricks, sticks and straw. The wolf is again the wild symbol. It also appears stacked on alternate reels and awards the largest line payouts. In the Huff N’ Puff Shuffle Feature the wolf arrives on his motorcycle and blows all the symbols away. The same symbols are then rearranged randomly on the reels payouts are awarded again in the same spin. The Pigs Running Wild awards 15 free spins feature. During any free spin if the wolf appears to the right of any of the pigs, the pig is chased out of the reels and every spot it passes through is converted into a wild symbol. The final feature is the Blow The House Down. The wolf first tries to blow down the house of straw, then the house of sticks and finally the house of bricks. You get bigger payouts with each house destroyed. If the wolf fails to destroy two houses then the feature ends.