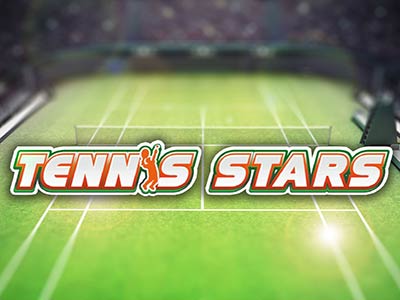 The 2017 Australian Open Grand Slam tennis championship has reached the business end. Federer, Wawrinka, Nadal and Dimitrov are the contenders in the Men’s Singles. The Williams sisters are on path to set up a finals clash in the Women’s Singles. You can enhance the tennis experience by wagering on the Tennis Stars online pokie. It is live at Playtech online casinos like Omni Casino and mansion Casino.

Tennis Stars video pokie has 40 paylines arranged across four rows of symbols. The biggest payouts are awarded by the male and female tennis stars. If you land five of the same player in an active payline you will take home 5,000 times the line bet. The other symbols from the sport are tennis shoes and tennis balls. The low paying symbols are the usual playing card icons. The wild symbol is the championship trophy. It can appear only on reels 2, 3 and 4. The action starts when you land it on all three reels in the same spin. You are first awarded a payout of 10 times the total bet. Simultaneously, the free spins feature gets activated. On offer are 15 free spins in which all line payouts are tripled. The free spins can be retriggered indefinitely.

The pair of tennis rackets is the scatter symbol. They awards scatter payouts multiplied by the total bet when two or more scatter symbols appear anywhere on the reels. Three or more scatter symbols trigger the Championship Bonus game on the second screen. You select from the male tennis star and the female tennis star to represent you in the game. You also have to select the type of tennis serve that your player will use from a flat serve or a slice serve. Then a simulated tennis game is played out on the screen. You will get a bonus payout depending on the game score and the number of aces served by your player. If you have won the game at love then you will get the maximum payout of 50 times the total bet. If your player serves four aces then you get the maximum payout multiplier of 5 times.

Tennis Stars online video pokie also includes the Playtech gamble game. You have the option of activating this feature after every spin with a win. In this game you have to guess the colour of the next card. A correct guess doubles the payout and a wrong guess results in a loss of the original payout.