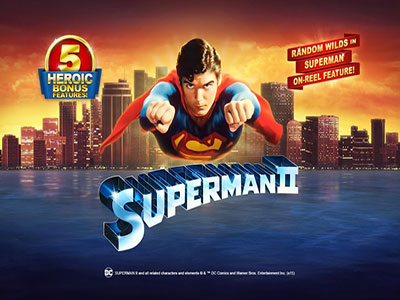 Last year Playtech, the leading software provider to Australian online casinos like Mansion Casino, had announced a tie up with DC Comics for the release of superhero branded pokies. Six video pokies featuring Batman were launched based on a television series of the 1960s. Recently Playtech launched the three Superman pokies based on different movies. These pokies feature Superman as the lead symbol and also other characters from the respective movies. All the Playtech DC Comics branded pokies are networked to the same multi-tier progressive jackpot.

The first Playtech pokie in this series is Superman the Movie. It is a 100 paylines video pokie with four rows of symbols across the reels. There are two exciting features. In the free spins feature, if the wild Superman logo lands on the reels it will remain locked for the remaining free spins. The Crystal Bonus feature is played on the second screen. You keep picking crystals and winning cash prizes. If you expose a multiplier then it will be applied to all prizes awarded till then. The feature ends when you pick the Kryptonite.

Superman II is rich in unique and diverse bonus features that are triggered by the Daily Planet logo. You will be randomly awarded one of five bonus games. The Phantom Zone feature awards free spins. In each free spin a randomly selected block of four spots on the reels will have wild symbols. The feature can end after any free spin. The Skyline Flight feature awards 10 free spins. When Superman lands on the screen he stops the free spins counter and increases the payout multiplier. The villain will restart the free spins counter and reset the multiplier to 1x. X Ray Vision feature awards 15 free spins. In these free spins the X Ray symbol is an additional wild and can add two additional wilds on reels 2 and 4.

Superman Man of Steel is based on the latest of the three movies. The online pokie features shifting wilds, which Playtech has used in a few earlier pokies. The Superman wild symbol shifts to the right after each spin and the General Zod wild symbol shifts to the left. When you get both these symbols on the same row the Battle for Earth free spins is triggered. In this feature, when Superman and any of the villain symbols appear on the same row, they create more wilds. The free spins continue till Superman is defeated.