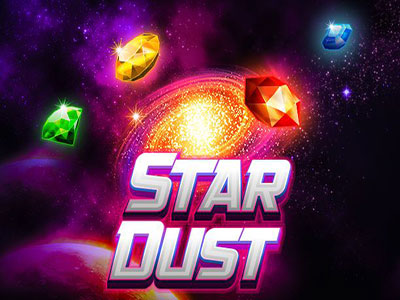 The main symbol in Starburst is the multi-coloured star that is an expanding wild symbol. The other symbols are bright gemstones of different shapes and colours. You also have the bar symbol set in the sun and the ‘7’ symbol set in the moon. When the star wild symbol appears on reels 2, 3 or 4, it triggers the Starburst Wilds feature. The payouts for the existing winning combinations are first made. Then the wild reel is held in place and the other reels are spun again. If you get a star symbol in the re-spin, then the process repeats. You can get up to three re-spins in this manner with payouts awarded after each re-spin. There are other attractions in the Starburst online pokie. The winning combinations pay from both right to left and from left to right. This doubles the chances of getting payouts. The symbols appear stacked on the reels so when the wins occur the payouts are usually big.

Stardust is a 5×4 format video slots with 40 paylines. The high paying symbols are gems and the low paying symbols are the usual playing card icons. The Stardust logo is a stacked wild symbol and it also awards the highest line payouts. The innovative feature in this online pokie is the Stardust meter. Every time the galaxy symbol appears on reel 3, one gem from each of the other reels can be transferred to the Stardust meter. When the meter is full the free spins feature is triggered. It awards between 10 and 13 free spins. During the free spins the format changes to all ways with 1024 paylines. The wild symbol becomes super stacked. The online pokie also has a new feature called Radiant Respin. If you get a winning combination with only three symbols, then reels 4 and 5 will spin again once. If there is a 4 symbols winning combination then reel 5 will respin once. This will give you a chance of getting a longer winning combination with a bigger payout. The maximum total bet per spin works out to $400 attracting high roller players.