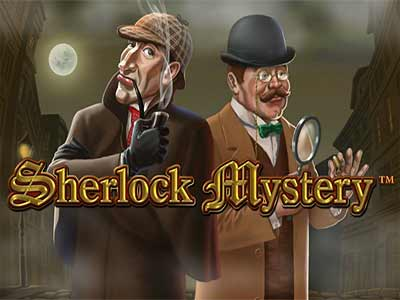 Sherlock Mystery online pokie is a treat for fans of the legendary fictional detective. It is from the portfolio of Playtech and can be played at online casinos like Mansion Casino and Omni Casino. As the game loads you can see a lean Holmes and a podgy Watson at the scene of a crime.

The wild symbol is a villainous looking figure, though he is not identified in the online pokie. Sherlock Holmes had many enemies, but his arch rival was Moriarity. The symbol also awards the highest line payouts, with a five-of-a-kind combination paying 10,000 times the line bet. Sherlock Homes and Dr Watson are other high paying symbols. Like the villain they start paying when two like symbols appear on an active payline from left to right. These symbols exhibit thematic win animations. Holmes smokes his pipe and Watson sips from a cup of tea. The low paying symbols are a revolver and a letter opener followed by the usual playing card icons.

The bonus features begin with a payout on the reels. When the doctor appears to Holmes’ right on any row, you get paid three times the total bet. You can see the symbols merge and hear Holmes say the famous, but apocryphal, line “Elementary my dear Watson”. The 221b Baker Street logo awards scatter payouts and triggers the free spins feature. You will be awarded 10 free spins with the revolver acting as an extra wild symbol. When the extra wild substitutes to make winning combinations you will be awarded a random multiplier from 2x, 3x and 5x. The free spins can be retriggered infinitely. The magnifying glass symbol triggers the Crime Bonus game on the second screen when it lands anywhere on reels 1, 3 and 5 in the same spin. You will be taken to the scene of the crime that is a bedroom. There are eight clues hidden and you keep picking from them guided by commentary from Holmes. You win a random bonus credit for each clue picked. If the clue reveals a Collect then the bonus feature ends.

Sherlock Mystery is an online slot in the 5×3 reel structure with 20 selectable paylines. The line bet can be varied from AU$0.01 to AU$100. This gives a massive maximum total bet per spin of AU$2000, which no high roller at Australian online casino player can complain of. You have all the Playtech functionalities in this online pokie that includes Auto Play and Turbo Mode.