Solve A Mystery At Online Casinos 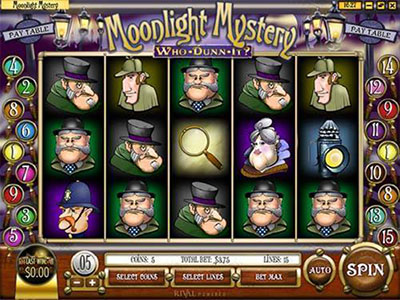 Everyone loves a good mystery. Players at Australian online casinos have two great ones. You can engage with these murder mysteries again and again at online casinos like Joe Fortune and Ignition Casino.

The first one is an online pokie from Rival gaming titled Moonlight Mystery. The story is set in 19th century London as can be deciphered from the costumes of the characters involved in the story. They include Professor, Constable, Doctor, Inspector, Butler, Maid, Lady Dunnit and Colonel Dunnit. The highest payouts are awarded by the magnifying glass. The bottle of poison is the wild symbol. In the base game the payout is multiplied by the number of wild symbols appearing in the winning combination. During the free spins the poison bottle becomes an expanding wild symbol. Ten free spins are awarded by landing three or more lantern symbols anywhere on the reels. The corpse triggers the Who Dunnit bonus game on the second screen. The bonus begins with a clip of a dark rainy night on which a murder has been committed at Dunnit Manor. You have to help the Inspector and the Doctor in solving the mystery by selecting the crime scene, the weapon, the culprit and the motive. You get to select from four options in each case and win bonuses for your choices.

It’s a Mystery is the online pokie from Realtime Gaming. The elements of the mystery are presented as symbols on the reels. The mansion is the scene of the murder. The characters involved are the detective, the Lord and Lady of the mansion and the butler who is shown holding a candlestick and a blood stained cloth. The Question Mark is the wild symbol. When it appears in a winning combination the symbol reveals the body of the victim. The game logo is the scatter symbol and it also triggers the Portrait Puzzle Feature. A nine piece portrait has symbols in random places. Any piece that ends up in the correct position is locked and the remaining pieces shuffled again. The number of shuffles is equal to the number of scatter symbols that trigger the feature. The number free spins, from 5 to 50, is determined by the number of portrait pieces in the correct position. A similar process decides the multiplier from 1x to 6x. If the entire portrait is arranged correctly a bonus credit is awarded. It’s A Mystery includes the popular Realtime Gaming Win-Win Feature and Feature Guarantee.