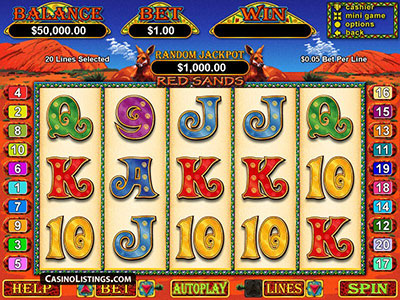 There many popular themes in online pokies. But there is no joy better than playing a pokie that brings your own country on the reels. Therefore Red Sands pokie draws high traffic at Australian online casinos. It has been developed by Realtime Gaming especially for online casinos like Joe Fortune, Ace Pokies and Fair Go.

The name of the online pokie derives from the red sand found in the interior of the Australian continent. The background to the reels is a desert with red sands. The high paying symbols are animals that are found only in Australia. These include echidna, wombat and koala. They are all the more attractive because they start paying out from two-of-a-kind combinations. The usual playing card icons are the low paying symbols. They are integrated with the theme through brightly coloured patterns taken from Aboriginal art.

The kangaroo is the most iconic image from Australia and it plays a very important role in Red Sands online pokie. It awards the highest line payouts starting from a single symbol landing on the first reel. If you manage to get five kangaroos on an active payline you will win 5,000 times the line bet. The kangaroo is the wild symbol as well and has a 2x multiplier property.

The moonscape is the scatter symbol. Two or more scatter symbols award payouts multiplied by the total bet. But these symbol do not pay when they appear anywhere on the reels like in other pokies. They have to appear in successive reels from left to right or from right to left, but not necessarily on active paylines. Two or more aligned moonscape symbols trigger the Respin Feature. The reels with the moonscapes symbols are held fixed while the other reels spin again. These reels can spin up to 10 times when the feature is triggered. You only get scatter payouts in the respins, but this time the moonscape symbols can appear anywhere on the rules. Also the kangaroo substitutes for the scatter symbol during the feature.

Red Sands includes the Realtime Gaming randomly triggered progressive jackpot. It can be hit after any spin without any specific symbols appearing on the reels. Also there is no minimum bet requirement. Red Sands is a five reels video pokie with three rows of symbols across the reels and 20 selectable paylines. The maximum line bet is AU$0.25, which works out to a maximum total bet of AU$5 per spin.