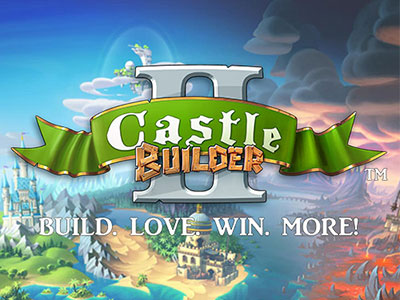 A new video pokie titled Castle Builder II has just been launched. This is the latest in a long line of online pokies from Rabcat Gaming that are available at Microgaming online casinos under a licensing agreement between the two games suppliers. This article reviews a few of them. You can wager on these pokies at online casinos like All Slots, Spin Palace and Royal Vegas.

Penguin Splash takes you to the ice cold climes of the Antarctic. The high paying symbols are four polar animals of which the whale awards the highest line payouts of a whopping 20,000 times the line bet. Four symbols pay 2000 times the line bet. The low paying symbols are the playing card icons designed as ice sculpture. The fish is the wild symbol. The penguin triggers the free spins feature in which you are awarded up to 25 free spins. Some of the penguins on the ice blocks outside the reels dive into the sea. If two or more penguins are left on the ice blocks then the free spin payouts are doubled. Penguin Splash also includes a gamble feature.

Greek mythology slots are very popular and one from Rabcat is titled The Legend of Olympus. The reels are set in a typical Greek temple. The high paying symbols include deities such as Hephaestus, Aphrodite, Ares, Poseidon, Hades and Zeus. The lower paying symbols are the iconic items representing other Greek deities. Zeus triggers the free spins feature. The number of free spins is determined as an outcome of a battle between Zeus and Hades. The gold coin activates the River Styx bonus feature. If two of the three spinning coins turn out to be gold in colour then you are assured of winning either the Big Treasure or the Small Treasure. Otherwise you will receive a compensatory payout.

Scary Friends online pokie features some of the cuddliest monsters. The yellow hairy monster is the wild symbol. The low paying symbols are the usual playing card icons. All symbols start paying out when they appear in two of a kind combinations from left to right. The fur ball triggers up to 14 free spins. The group of monsters triggers the bonus game on the second screens. You have to pick one of the monsters. The scary friends then engage in a competition and your prize is determined by the position secured by your chosen monster. An optional gamble feature is included as well.