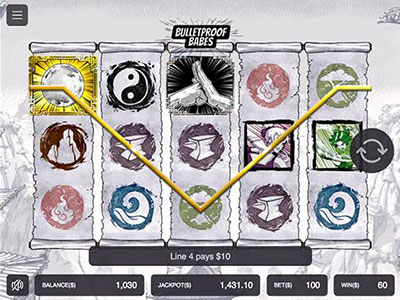 The latest trend is for online casinos to offer games from multiple suppliers so as to give their players variety to choose from. Some of the best online casinos like Ignition Casino and Joe Fortune have taken on board Proprietary Games. This software developer is known for creating online pokies with spunky themes. Three of the best titles are reviewed in this article.

Bulletproof Babes is the first of these pokies. The high paying symbols are the four bulletproof babes designed in manga style graphics and displaying their super powers. The top payout is 2000 times the line bet. The low paying symbols are typically Japanese emblems like yin and yang, tidal wave and bonsai tree. The wild symbol is the leader of the girls. It appears only on reels 1, 3 and 5. The girl fight is the scatter symbol. The moon appears only on the first reel and it doubles payouts for each payline on which it appears. When the moon and the temple appear in the same spin you will be awarded up to 25 free spins. The temple and the moon become additional wilds during the free spins. The free spins payout multiplier starts at 1x and increases in each spin till it reaches 10x. Bulletproof Babes also has a randomly triggered progressive jackpot.

Cleopatra is the favourite personality at online casinos. She is sexy, daring and with an I don’t care attitude. Proprietary Games presents exactly this Cleopatra in the online pokie A Night with Cleo. The reels are set in the Queen’s luxurious surroundings. The high paying symbols are the Eye of Horus and golden ornaments like necklace, amulet and ring. Cleopatra is the wild symbol with a 2x multiplier property. She also awards the top line payout of 10,000 times the line bet. The keyhole awards scatter payouts multiplied by the total bet. Three or more scatter symbols trigger the free spins feature. You will be awarded 15 free in which all payouts are tripled. There is a Double Up feature in which the seductive Cleopatra performs a strip tease.

Fast & Sexy is the latest online pokie from Proprietary Games. The high paying symbols are the four sexy female drivers. The Wild Girls logo is the wild symbol and it also awards the top line payout of 10,000 times the line bet. When the wild symbol lands the third reel it becomes and expand wild and awards a free respin with the wild reel held fixed. The first bonus features awards 10 free spins in which all payouts are doubled. In the bonus game on the second screen you get to pick three fast cars to win a payout multiplier.