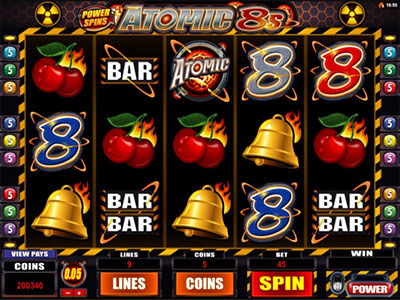 There are some online pokies that cater to both conservative and risk taking players in an unusual manner. Risk taking players can place higher wagers and activate additional features. One such series of three online pokies is Power Spins from Microgaming. Activating the optional Power Spins feature automatically levies the additional wager and initiates the additional benefit. These video pokies are live at all Microgaming online casinos like Casino Mate, 32Red and Platinum Play.

The first Power Spins online pokie is titled Sonic 7s. It uses retro symbols from classic pokies like different 7s, different bars, cherries and bell. Keeping the sci-fi nature of the theme in mind, the symbols are in a steel blue colour. The wild symbol is the game logo and the scatter symbol is the scatter logo. Activating the Power Spins feature results in the following action. All the 9 paylines are automatically enabled and an extra amount equal to three times the line bet is added to the wager. The benefit is that each wild symbol on the reels individually doubles the payouts. The total multiplier is capped at eight times.

The second online pokie of the Power Spins series is Atomic 8s. The symbols remain the same but with a different flavour. They are in their natural colours and have a flaming background. The atomic logo is the wild symbol and the radioactive sign is the scatter symbol. The Power Spins feature works in exactly the same way as far as the cost is concerned. But in Atomic 8s the benefit is different. Winning combinations pay out both left to right and right to left. This effectively doubles the number of paylines.

Nuclear 9s is the final online pokie of the Microgaming Power Spins series. It has the same 5×3 structure with 9 paylines video slot. The same classic pokies symbols are set against a background of deep green this time. The game logo is the wild symbol and the nucleus of the atom is the scatter symbol. Activating the Power Spins feature in Nuclear 9s leads to a different benefit. The symbols in winning combinations fade away and new symbols fall down to take up the empty spots. If a new winning combination is formed then the process repeats. This will keep happening till you reach a configuration without any wins. The action does not end here. With each repetition the payout multiplier increases by 1.