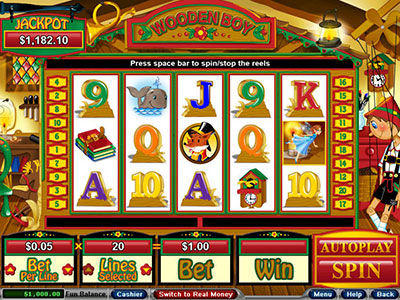 Pinocchio was created by the Italian writer Carlo Collodi in 1883. Over a hundred years later his popularity has not diminished. Children love Pinocchio as the wooden puppet whose nose grew longer every time he lied. Adults too enjoy this fantasy tale through online pokies.

Wooden Boy is a video pokie from Realtime Gaming that can be played at Fair Go online casino. The reels are set in Geppetto’s workshop, where Pinocchio was carved from a block of wood. Players familiar with the story will easily recognise the high paying symbols on the reels. They include the blue fairy that gave Pinocchio life and converted him from a puppet to a boy. Honest John is ironically the fox who tricks him and leads him to bad ways. Finally there is the whale that swallows Geppetto. The low paying symbols are playing card icons fashioned from wood. Pinocchio is appropriately the wild symbol. When it appears a pile of wood shavings appears expanded across the entire reel and Pinocchio emerges dancing a jig. The blue fairy is the scatter symbol. You will hear her advisory, “Now, remember, Pinocchio be a good boy.” Three, four or five fairy symbols appearing anywhere on the reels trigger 5, 10 or 15 free spins respectively. During the free spins Pinocchio takes on a 3x multiplier property when it substitutes in a winning combination.

Casino Mate offers the video pokie titled Pinocchio from Betsoft. It features 3D graphics that enhance the visual appeal of the online pokie. The high paying thematic symbols include Pinocchio, cage, show poster, woodworking plane and cuckoo clock. The structure of the game play is more complex. The game starts in The Workshop mode with Gepetto being the scatter symbol. It triggers the Wild Scroll feature in which the wild scroll symbol moves one reel from right to left awarding a free respin each time. The game may randomly move to The Classroom mode. The books trigger the Wild Scroll feature in which the wild symbol moves down the reel awarding free respins. The third mode is The Stage with the wagon as the scatter symbol. Here you get a fixed wild reel for five free respins. The real boy symbol unlocks the Real Boy mode in which all Pinocchio symbols become wilds. The fairy is an integral part of the Pinocchio story. She can magically respin any reel giving you another chance to win.