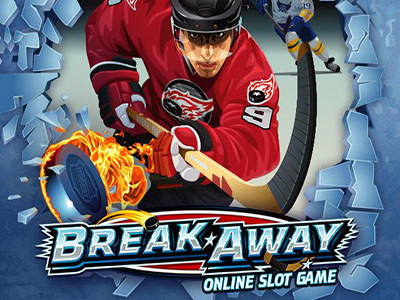 Ice hockey is not that popular in Australia, but online pokies based on this sport draw a lot of traffic. This article reviews two such video pokies.

Break Away is an online pokie from the games supplier Microgaming that is live at online casinos like Platinum Play, Spin Palace and Crazy Vegas. Its detailed artwork and vibrant win animations set is apart from the pack. The high paying symbols are ice hockey players and referee. The low paying symbols include hockey rink, mask, skates and ice maker. Break Away is a 243 ways to win online pokie. Symbols in winning combinations disappear after the payouts are awarded and are replaced by new ones. If new winning combinations are formed again then the process repeats itself. The Break Away logo is the wild symbol that can appear in stacks on reels. The Smashing Wild feature may be randomly triggered. It will turn one of the central three reels into wild with a payout guaranteed. The flaming puck awards scatter payouts and also triggers the free spins bonus. You can win up to 25 free spins with the Rolling Reels feature. Consecutive wins in the same free spin are paid out with increasing multipliers that can go up to 10x. The free spins cannot be retriggered.

The Playtech game with this theme is titled Ice Hockey. You begin by selecting two teams. The players of one team pay left to right and the players of the other team pay right to left. Players from the same team pay in both like and mixed combinations. The playing card icons pay in both directions. The wild symbol is the goal and it awards the largest line payout of 10,000 coins. The Ice Hockey logo awards scatter payouts. 12 free spins are triggered when the flag of the same team appears simultaneously on reels 1 and 5. Players only from that team will appear on the reels during the free spins. Winning combinations pay out both ways. The ice hockey puck is the bonus symbol. It triggers a unique and interesting bonus game. The puck will be passed between all players of the team that triggered the feature. The payout is three times the total bet for every player that touches the puck. This feature can be triggered only in the main game. Ice Hockey is a 15 paylines video pokie in the standard 5×3 format. It is live at Playtech online casinos like Mansion Casino and Omni Casino.