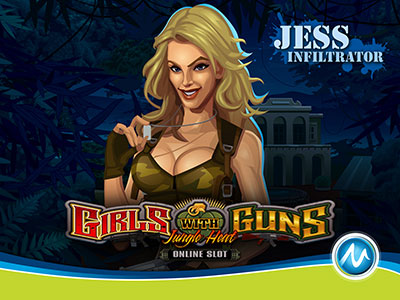 Books and movies have sequels so why not online pokies. The Lara Croft branded pokies from Microgaming, Tomb Raider and Secret of the Sword, were among the first paired games. Continuing with the themes of women and adventure, Microgaming has another pair of online pokies titled Girls with Guns. The original was subtitled Jungle Heat and the sequel was Frozen Dawn. They are live at online casinos like Royal Vegas and Casino Mate.

The Girls with Guns are a band of six females dedicated to fighting evil. Katherine is the leader, Maria is in charge of the artillery, Kira is the sniper, Alex carries out the demolitions, Zoe does the tactical planning and Jess infiltrates into enemy camps. Together they are unbeatable. Both online pokies are 243 ways to win. The main difference is in the two missions in vastly different terrains, which make the two pokies visually unlike each other.

Jungle Heat is set in a dense tropical forest and the mission is to eliminate a drug dealer. The high paying symbols include the six girls, the drug dealer, his aides and the hideout. The game logo, which appears stacked on the reels, is the wild symbol and also awards the top line payouts. The girls in a group form a special wild symbol that appears only on reel three. But it can expand as one of the girls to make winning combinations. The hand grenade is the scatter symbol. Three or more scatter symbols trigger 15 free spins. In each free spin one randomly selected reel is turned wild. The free spins can be retriggered.

Frozen Dawn is set in harsh snowy mountainous terrain. The enemy this time is Saskia, who has designs to change the climate and thereby destroy the earth. The high paying symbols are the same, but suitably modified for the mission at hand. The bonus features are somewhat different in Frozen Dawn. The Shootout Bonus may be randomly triggered after a winless base game spin. One of the girls will appear on the screen and shoot one of the playing card icons awarding you bonus credits. The satellite that Saskia wants to use for changing the climate is the scatter symbol. It awards 12 free spins in which you will be randomly assigned one of two features. The Frozen Wilds feature holds the wild symbols that land on the reels in place for three spins. The Magnetic Wilds feature moves special wild symbols to the left most position on a row and holds them in place for the remaining free spins.