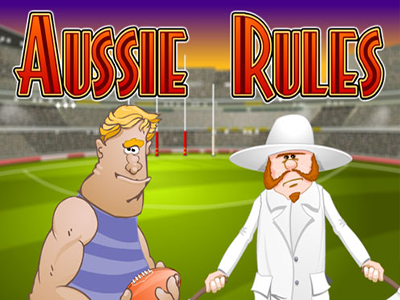 There are plenty of online pokies based on soccer, rugby and American football. But Australian online casino players would prefer the local form of the sport known as Aussie Rules. So, online casinos like Joe Fortune and Ignition Casino have an online pokie from Rival Gaming known as Aussie Rules. The sport features two teams of eighteen players competing on an oval-shaped field.

Aussie Rules is a fairly old video pokie with the standard format of five reels and three rows with 15 variable paylines. Though you can select less than 15 paylines, the optimum pokies strategy dictates that you should play with all of them enabled. Aussie Rules online pokie loads with an animated introductory clip that presents football action. The high paying thematic symbols are player, boots and whistle. The low paying symbols are playing card icons. As usual, you need to land three or more of like symbols appearing from left to right on an active payline in order to win.

The other forms of football are also covered by Rival Gaming pokies at Australian online casinos. The titles are Pigskin Payout and Global Cup Soccer.