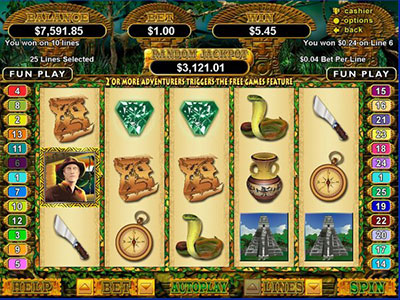 A quote attributed to Queen Elizabeth I is “I know what it means to be a woman in a man’s profession.” Archaeological expeditions to remote corners of the earth have thus far been a man’s prerogative. But two women at Australian online casinos like Joe Fortune and Ignition Casino have made this profession their own.

The first is Indiana Jane and she plays the lead role in an online pokie from Realtime Gaming. She has been described as “a feisty archaeologist with the brains and instinct to solve any riddle”. In this online pokie she is on a mission to unravel the symbols that will reveal new secrets about the Mayan myth. The other high paying symbols are a nerd like male assistant, a priceless Mayan gem and some tools of her trade. The low paying symbols are the usual playing card icons. The game logo is the wild symbol. It doubles payouts when substituting in winning combinations.

The jade idol is the scatter symbol. When you land the symbol anywhere on reels 1, 3 and 5 you are paid 5 times the total bet and taken to the Secret Tomb Bonus Feature. You will have to choose one of the scatter symbols, which will reveal the number of mystical orbs that you will pick in the next round. Each orb will reveal a number of free spins or payout multipliers. These will be accumulated and added to the base number of three free spins and 2x multipliers. Indiana Jane is a 25 variable paylines online pokie with a random progressive jackpot that can be hit after any spin.

Jenny Nevada and the Diamond Temple is an online pokie from Rival Gaming. In the introductory clip Jenny reaches the secret entrance of the Diamond Temple where the treasures are hidden. Thereafter her fate depends on the spin of the reels. The thematic symbols include parchment map, land rover, binoculars, pistol, golden mask, explorer’s hat, knife, the temple and bag of diamonds. The rope is the wild symbol and it also awards the highest line payout. Jenny Nevada triggers the free spins bonus round. You can win up to 50 free spins in which all payouts are multiplied four times.

The bonus game on the second screen is triggered by the biplane symbol. You have to accompany Jenny inside the Diamond Temple. You first collect the diamonds in the entry chamber and win bonus points. You then select one of the doors to the next chamber and repeat the process. A door may lead to a booby trap and end the feature. The Diamond Temple is a 20 paylines online pokie.