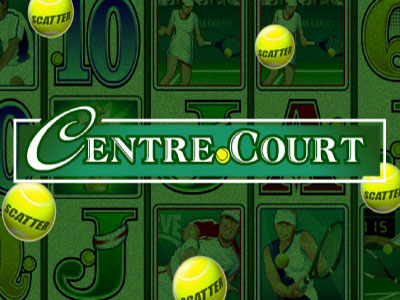 It is Wimbledon time and there is only one online poke for Australian casino players who are tennis fans as well. Centre Court was released by Microgaming for Wimbledon 2009 and continues to draw high traffic every year during the Grand Slam event. You can play Centre Court at Australian online casinos like All Slots, Spin Palace and Crazy Vegas.

As the game loads you will be transported to Wimbledon with the reels set in the lush green grass of the Centre Court. The high paying symbols are the Match Point logo and four different tennis players executing various forehand and backhand strokes. The low paying symbols are the playing card icons depicted with tennis accessories like cap, wristband and tennis ball. The trophy is the wild symbol and it also awards the highest line payouts starting from a two-of-a-kind combination. Five of these symbols in an enabled payline award a payout of 1,000 times the line bet. You can expect Centre Court online pokie to exhibit low variance.

The tennis ball is the scatter symbol. Two or more tennis ball symbols anywhere on the reels award payouts multiplied by the total bet. The highest scatter payout is 500 coins. Three or more tennis ball symbols also trigger the free spins bonus round. You will be awarded 18 free spins with a mystery multiplier that can vary from 2x to 5x. The free spins can be retriggered. During the free spins, the wild symbol can appear stacked on the reels. You can get wild reels that will increase the possibility of payouts. Centre Court also offers the Microgaming popular gamble game. You have the option of activating this feature after any winning spin. You can try to double your winnings by guessing the colour or quadruple your winnings by guessing the suit. If you guess wrong then you will lose the amount won in the spins.

Centre Court is a five reels and three rows online pokie with nine selectable paylines. Though you can choose less than nine paylines, it would not be a good idea to do so. You can wager up to ten coins per payline with the coin denomination ranging from AU$0.01 to AU$0.25. The maximum total be per spin is AU$22.50, which makes Centre Court a low roller online pokie. Microgaming has online pokies for every sport. Cricket Star, Football Star, Rugby Star and Basketball Star are very popular.