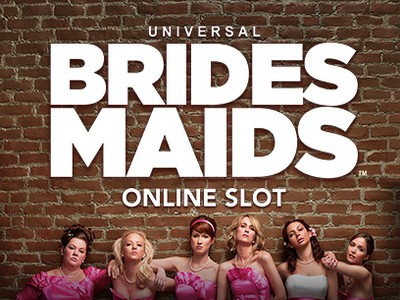 It is the season of movie awards so we recommend a branded online pokies based on a very popular Hollywood comedy film Bridesmaids. It was released by Universal Pictures in 2011 and received nominations at several prestigious award ceremonies including Oscar and BAFTA. The online pokie was released by Microgaming and is live at online casinos like 32Red, Casino Mate and Royal Vegas.

The high paying symbols are the bride and the bridesmaids represented by the characters from the movie. Each lady appears as a normal symbol and as a symbol that covers two rows. The Bridesmaids logo is the wild symbol and it depicts the six ladies together. It can appear stacked on the reels. This symbol also awards the highest line payouts. Annie’s cupcake is the scatter symbol. It awards payouts multiplied by the total bet when two or more appear anywhere on the reels. The low paying symbols are not playing card icons but the four suits. Because Bridesmaids is a branded online pokie you will see popular scenes and hear popular dialogue from the movie.

The highlight of the Bridesmaids online video pokie is the Wheel Bonus feature. You first choose a cupcake, which enhances some of the features on the wheel. Then you spin the wheel to win one of several awards that include bet multipliers, a fixed jackpot or one of four bonus games. The Friendship bonus awards 10 free spins in which winning combinations pay both left to right and right to left. Some of the bridesmaids will appear stacked on specific reels. The Flying High bonus also awards 10 free spins, but with the popular Microgaming Rolling Reels and Growing Wilds features. You have to match the bridesmaids in the Boutique bonus feature for prizes and bonus multipliers. The bonus feature ends when you find a match for the bride. The Magic Moments brings alive the branded aspect of the online pokie. You keep picking scene from the movie and see them played on the screen. You will receive a bonus for each pick. The bonus game will end when you pick a carrot.

Bridesmaids is a 40 paylines online video pokie in which all paylines are enabled by default. The total bet per spin varies from AU$0.40 to AU$300.00. Both low roller and high roller players at Australian online casinos will find it suitable. Bridesmaids is not a high variance online pokie.