Bowling and Darts In Online Pokies 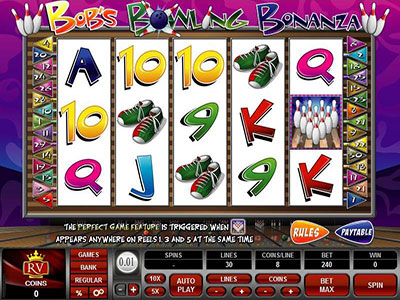 When you think sports you usually think outdoors towards football, tennis, golf and the like. But there are sports played indoors as well. Two of the most popular are bowling and darts. This article recommends two video pokies based on these sports from Microgaming. You can play them at online casinos like 32Red, Casino Mate and Royal Vegas.

The bowling themed online pokie is titled Bob’s Bowling Bonanza. Bob plays the lead role and awards the top line payout of 5000 coins for landing five symbols on an active payline. The other thematic symbols awarding line payouts are female player bowler and trophy. The bowling ball is the scatter symbol and awards payouts multiplied by the total bet. The game logo is the wild symbol. It can appear only on reels 1, 3 and 5. But if you get the symbol on all the three reels in the same spin, you get to play one of the most interesting bonus games. In keeping with the theme, all the three reels turn into bowling alleys. You roll the ball down the alley with the intention of knocking down the pins. The total of the pins knocked down in each reel multiplied by the triggering is your bonus award. If you score a strike on any reel then the payout is doubled.

Bullseye is a darts themed branded video pokie based on the popular TV game show of the same name. Bully, the darts playing bull, was the show’s mascot and is the stacked wild symbol in the online pokie. It also awards the highest line payouts. The other high paying symbols are the big prizes awarded in the Bullseye TV show such as speedboat, caravan and car. The low paying symbols are the consolation prizes awarded to the contestants like a branded set of darts, a tankard, cash, sun glasses and Bendy Bully. The Bonus dart board symbol triggers the Bully’s Prize Board bonus game on the second screen. Nine prize board areas are displayed on the screen. Each area conceals a random bonus prize. You can choose five areas to win bonuses up to 15x the bet. The Free Spins dart board symbols trigger fifteen free spins in which all payouts are doubled. The feature can be retriggered. Bullseye has the standard 5×3 structure with 243 ways to win. You can wager up to 10 coins per payline with a maximum coin size of AU$0.25. The total bet is 30 times the line bet.