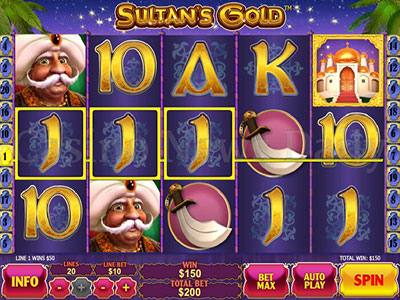 The Arabian Nights saga has created such an iconic image in the minds of people that is has become a popular fantasy theme for online pokies. Every leading software provider has several such video pokies in its portfolio. This article recommends two Arabian gems from Playtech. You can play them at Australian online casinos like Omni Casino and Mansion Casino.

Sultan’s Gold is the first of these online pokies. The sultan plays the lead role by awarding the highest line payouts. The thematic symbols include belly dancer, magic lamp and scimitar. All these symbols start paying from two-of-a-kind combinations. They also exhibit appropriate win animations. The belly dancer’s gyrations are a treat to watch. The low playing symbols are the playing card icons crafted ornately in gold. Both the wild and scatter symbol is the palace. It leads to the bonus feature that awards 10 free spins with the Playtech Mystery Scatter feature. Any one of the regular symbols is randomly selected as the mystery scatter during the free spins. It awards scatter payouts multiplied by the total bet just like the designated scatter symbol when three or more appear on the reels. The free spins therefore are played with two scatter symbols. Sultan’s Gold is a 20 paylines video pokie that has a bet range suited for the highest of high rollers at Australian online casinos.

The second Arabian Nights themed online pokie is Desert Treasure II. It is a remake of the earlier Desert Treasure title with greater audio visual effects. The golden cobra symbol is an expanding wild symbol but it does not award any line payouts. The top line payout of 10,000 coins is awarded by the Arab man symbol for a five-of-a-kind combination. The other thematic symbols are oasis and camel. The playing card icons are set in a desert background and contain creepy crawlies found there. The free spins feature is triggered by the Arabian girl scatter symbol and awards 15 free spins at doubled payouts. The bonus game on the second screen is triggered by the map and compass symbol. It is a multi-level bonus game. The first level takes you to the oasis where the Arab asks you to choose between three and five treasure boxes. You win bonus prizes but may also find the map that will take you to the second stage. You can choose either the Secret Tent or the Hidden Sanctum on the map. More bonuses are to be won at your chosen location.