An Innovative Online Pokie From Playtech 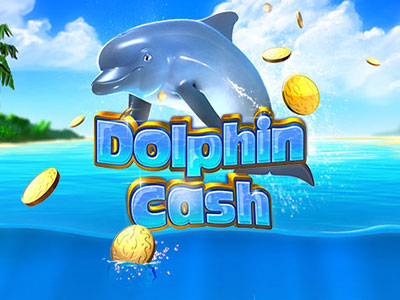 Dolphin Cash is a popular Playtech online pokie at Australian online casinos like Omni Casino and Mansion Casino. The video pokie has an ocean theme, which is a draw in itself. But in Dolphin Cash Playtech has introduced two innovative features that can lead to huge payouts.

The reels are set under the ocean, with a dynamic background in which the waves are in motion and the fish are swimming. The reel partitions are made up of bubbles of water streaming upwards. This adds to the visual appeal by creating a realistic environment. The high paying thematic symbols are shells, coral, sea anemone and gull. These symbols exhibit win animations. The playing card symbols offer the lower payouts.

The special symbols in Dolphin Cash drive the online pokie forward. The Dolphin Cash logo awards scatter payouts multiplied by the total bet and also triggers 12 free spins in which all payouts are tripled. The free spins feature cannot be retriggered. The pearl symbol appearing in the same spin on reels 1 and 5 triggers the Dolphin Cash bonus game on the second screen. A number of coins are displayed above the ocean’s surface. You have to select a dolphin which will leap out of the ocean and collect as many coins as possible. Some coins may be collected by a flying seagull and added to the kitty. Each coin pays an amount equal to the total bet wagered per spin.

The dolphin is the wild symbol. It also awards the highest line payout of 4,000 coins. The first of the Playtech innovative features called shifting wilds is associated with this symbol. The dolphin will first appear on reel 5. Then with every spin it moves one reel to the left till it disappears after reaching reel 1. If you change the bet amount while the shifting wilds feature is in progress, the dolphin will disappear from the reels.

The second innovative feature in Dolphin Cash online pokie is XtraWin. This feature is disabled by default when the game loads and needs to be activated by you. It is an optional feature and you can play the pokie game without activating XtraWin. When activated. 50% of your total bet is added to the stake. In return, every time a shifting wild appears on reel 5 it duplicates itself. You then have two wild symbols on reel 5 both symbols move one reel to the left for the next four spins. The line wins pay as per the original bet but the scatter wins pay on the enhanced total bet.