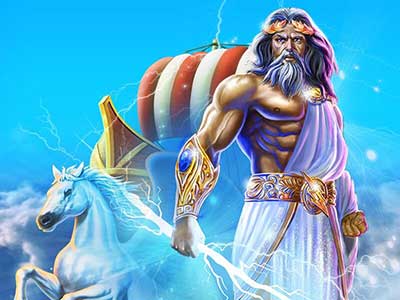 In the middle of 2016 Playtech launched a series of progressive jackpot online pokies Age of the Gods. These were developed as an advance replacement of the immensely popular Marvel branded online pokies, which are slated to be discontinued when their current agreement ends. The Age of the Gods pokies are presently networked to the Marvel Mystery progressive jackpot. The progressive jackpot is hit in the same way through a randomly triggered bonus game. These pokies feature characters from Greek mythology just as the earlier set features Marvel superheroes. You can play the Age of the Gods pokies at Playtech powered Australian online casinos like Omni Casino and Mansion Casino.

The flagship online pokie of the series is Age of the Gods. All the other pokies have their own names but are tagged with Age of the Gods sub-title. Age of the Gods uses the same template as The Avengers, which is among the most popular of the Marvel pokies. The A Team of Greek deities consist of Athena, Zeus, Poseidon, Hercules and Artemis. In the Pantheon of Power bonus, when the five different deities appear on an active payline in any order you are awarded 200 times the line bet. Each god or goddess awards 9 free spins with a unique feature. King of Olympus uses the template from Iron Man 2. Zeus, the king of the Greek gods, is the wild symbol and awards the top line payouts. The bonus feature awards 10 free spins. The payout multiplier starts at 2x and increases steadily. Zeus appears as an extra fixed wild on the centre row of the third reel during the free spins.

Prince of Olympus is Hercules, the son of Zeus. He is known for his brute strength and therefore Playtech has matched him with The Hulk. Hercules was compelled to perform twelve labours and most of the symbols depict the more popular ones. The bonus features also parallel those in The Hulk with suitable thematic differences. Furious 4, based on the Marvel branded pokie Fantastic 4, has Prometheus, Apollo, Pandora and Atlas instead of the superheroes. The individual female representative in the Age of the Gods series is the Goddess of Wisdom, Athena. This online pokie uses the template of Elektra, the female superhero in the Marvel series. In Iron Man 3 Tony Stark takes on three different avatars. These correspond to the three Fate Sisters in the Age of the Gods series.