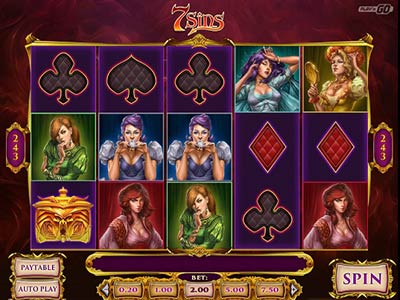 If you are the type of player that cannot resist temptation then 7 Sins is the perfect online pokie for you. It is one of the best titles from Play ‘n Go. You will find it in the portfolios of several online casinos like Casino Mate and Rizk Casino.

The video clip played while the online pokie loads introduces the creation of the seven biblical sins as seductive beauties. These are pride, greed, lust, envy, gluttony, wrath and sloth. You will recognize each sin from the depiction in the symbol and more particularly through the win animations. For example, Sloth is in idle languor and Pride vainly preens in the mirror. Give into temptation because these ravishing women will award the high payouts. The low paying symbols are the four playing card suits.

The gold vanity box is the scatter symbol. Three of them anywhere on the reels award a payout of two times the total bet. You will also be awarded seven free spins. In each free spin only one of the sins will appear on the reels. It will appear expanded in full length on the central reel. The payout multiplier increases with each free spin, starting from 1x and going up to 7x. Though there are only seven free spins, the payouts are likely to be rewarding.

7 Sins video pokie includes an innovative Second Chance feature, which gets activated when you land two and only two scatter symbols on the reels. The seven temptresses will be displayed on the second screen and you have to select only one of them. Visually that may be a difficult choice but the result is delivered on a random basis. If you are lucky your sin will reveal the third scatter symbol and activate the free spins. Otherwise you will be awarded a compensatory payout of up to 15x the total bet.

7 Sins is a 243 ways to win online pokie. The top payout is 700 times the line bet, which is par for this structure. The maximum total bet per spin is AU$100, which will bring in the high rollers.